The step between macro and micro cosmos is not far. The depth of time, and nature’s everlasting presence in the rhythm of creation - through past, present and future – and all of our memories which is part of the fabric on the thread of time.

In my artistry, harmony and life force – where humanity interplays with the forces of nature of how creation functions – is the core in my ability to create. That in a world filled with chaos to be able to show the alternatives. Nature vibrates with a rhythm, a pulse, a musical string of notes. We are all part of its entirety. It is we who decide. 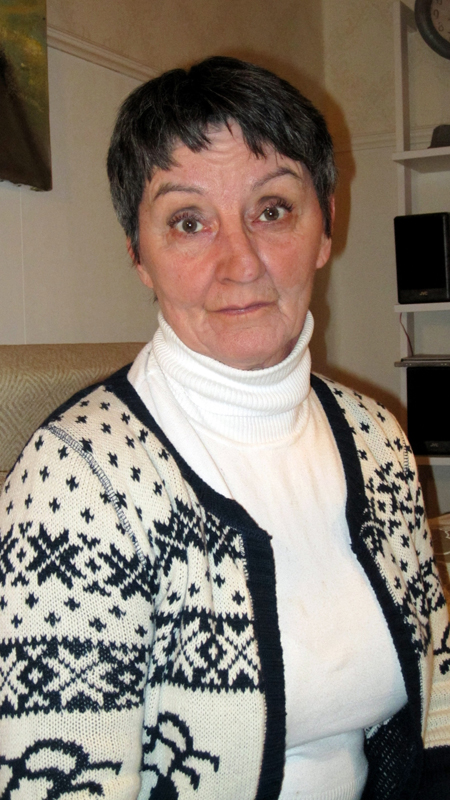 "To be an artist is as natural as breathing"

I was born and I am still living in Kalix in northern Sweden. My path to artistry began i 1978 with textile but for several years i have been painting, with mostly watercolor, oil and acrylic. In the last few years i have also been working with wood art. My signature before 1989 was A. Ståhle and A.L. Ståhle subsequently.

Trough the years i have participated in a number of Scandinavian and European exhibits and also a few in China, Japan and the U.S.A. In present day I am internationally renowned with honorable mention as one of Sweden's 100 foremost now living artist and Scandinavia's 80 foremost aquarelle painters. I am represented in several public institutions, corporations och private assemblies.

A few exhibits i have participated in:

When you read Kalix artist Anita Lindvall–Ståhle’s list of titles you will come across examples like Bowl with Flowers, The Piano Player and Mother with child.

This might make it easy to dismiss her art as kitschy portraits and still lifes. It is not ¬– far from it.

First I have preconceived notions based on the title Grazing Cow but instead I am amazed when I finally behold the fantastic works of Lindvall–Ståhle. The colours, shapes, vigour and balance are simply there in a natural way.

Of course this is not really surprising. Anita Lindvall–Ståhle has a solid list of qualifications with exhibitions all over the world, fine prizes and awards. She has been an artist for more than thirty years, and not just in oil – as in this exhibition – but also in sculptural techniques and in textiles.

The paintings hanging in the long gallery of the county council building are classic in their motifs. Yes, they are portraits and still lifes and nature. But the motifs have been abstracted and dissolved in colour fields, contours and lines – and instead the seemingly static obtains life and movement.

There is a lot of excitement here – a balancing act that fills the eye with joy. It is simply but intelligently done.

Mostly, she stays within the range of nature’s burnt notes, but every now and then accentuates with deeper colours. It never becomes sharp or bold, but rather dramatic. Almost fiery.

Eventually it strikes me that Anita Lindvall–Ståhle’s art probably best can be described with the word elegant – without losing its freshness and charming lust for exploration. Paintings with class, quite simply – and a timeless quality.

The Girl with the Forest Eyes

Anita Lindvall–Ståhle has had exhibitions in France, Germany, Bulgaria and Japan as well as in all corners of Sweden and she has met with great success. Her textile work Sea of Liberty was bought by the Swedish Parliament as a gift for the Chinese government. She is a versatile artist. ‘Curiosity and creative joy are the incentive’, she says.

Her childhood home at Daludden in Övermorjärv is surrounded by a circle of forest lakes, or should we say forest eyes. This is where she grew up with her mother, father and five older siblings.

‘The light of Norrbotten is blue’, Anita says.

This shows in her art. In her youth she walked around on the moors and imbibed the raw material for her work of creation. The area seems to have a good soil for artists, because her brother, Gösta Ståhle, was a prominent sculptor working with metal, and in the same neighbourhood there was author Otto–Karl Oskarsson thinking about the characters in his novels. Nowadays Anita lives in Innanbäcken outside Kalix.

Her road to art has not been a straight one. In ninth grade her art teacher said something that would stay with her: ‘Anita, you should try to get into the College of Arts, Crafts and Design in Stockholm.’

Anita was at that time only fifteen and thought that was something too big and distant for her and that she would not make it. Moreover, she thought that she would never be admitted to the college anyway. So for seventeen years she worked as a nurse’s assistant and as an occupational therapist. But then, in 1978, during her maternity leave, she started using her loom, inspired by her mother Edla, who once was among the first in the village to start with vegetable dying.

‘What I did was that I started painting with yarn’, Anita says, ‘but it was difficult since you always had to keep the wrong side up. You had to have a clear picture in your head and the shifts became long, because if your break was too long the motif would disappear.’

This was a time to strike while the iron was hot, and success came knocking at the door. Today, many public institutions all over Sweden are decorated with her textiles. After ten years, however, the long shifts of weaving started to take their toll and she began to feel pain in her neck and shoulders.

The girl with the forest eyes from the kingdom of forest eyes was not discouraged by this. Instead she started to paint. Oil–, acrylic– and water colour; success followed success, the finest being an honourable mention by a jury stating that she is one of the eighty foremost aquarelle artists in Scandinavia.

There is more. Ståhle’s girl is tough and in later years she has begun sculpturing in wood.

‘My ability to see colours comes from all the running in the forest as a child. I guess I was somewhat of a tomboy. My art originates from nature and the people of my childhood years.’

She has never experienced any jealousy or need to feel inferior. On the contrary, both the town and its people have supported her.

‘You will not become rich as an artist, but if you have it in you it has to come out one way or another’, she says.

Anita Lindvall–Ståhle is a self taught person. If there is a mentor that would be her mother Edla.

With the Lustre of Light

It is getting lighter now. After spells of cold and greyness the sun is appearing. The purity of light lifts our feelings. That is also what strikes me when I see Kalix painter Anita Lindvall–Ståhle’s pictures at the Swedish Art Gallery in Malmö.

In her oils there is a tribute to the light which is nothing less than a mental boost, a prayer of light’s lustre.

I experienced the remarkable thing that one of her pictures remained on my retina long after I had left the exhibition. It is like a white northern summer night or a cleansing after rooting in brown dirt for a while. Actually, I can get an inkling of Norrland in this work. But even more than that it is a human who has drawn brushes, loaded with white light and energy, on canvases, having created a sign for a hope of life. Anita Lindvall–Ståhle’s painting is the poetry of light. Glittering.

In the same gallery Martin Machule makes constructions that are hard to interpret but energetic and that, in spite of their sometimes firm shapes, feel as if they were very personal and very vigorous. I can actually see a heat and an explosive force in this rare and highly abstract visual art. (Some would call it highly ‘concrete’.) The Landskrona painter Sven Lindgren is at his best when he without complicated symbolism paints happy, simple sins. He has a sitting lady who plays the flute and whom he has portrayed peacefully and intimately. And he has some cut out coloristic landscapes that have a touch of natural feel.

Success in Paris for Kalix Artist

There was a nice response to artist Anita Ståhle’s oil– and aquarelle paintings that were on display at Gallery Jean Camion in Paris. Another exhibition in the art city above others is planned, and her art has interested, among others, Formula 1 driver Stefan Johansson.

For ten years Anita Ståhle in Kalix has worked as an artist full time. Mostly it has been textile work, largely used for public decoration. In later years she has also worked with aquarelle and oil, and this is what has caught the interest of people far away in Paris.

‘Anita has been highly praised during the two weeks of the exhibition at Rues Beaux–Artes Paris 6. Her art has definitely attracted attention’, say husband and wife Liliane and Nils Hellström, who represent the gallery.

The gallery has had many visitors from all over the world. Nils Hellström says that those who have been most captured by Anita’s imaginative pictures are the French, British and Americans.

Formula 1 driver Stefan Johansson became so fond of Anita Ståhle’s art that he will contact the Hellströms when he comes to Gothenburg. He has announced that he wants to purchase a larger piece of work by Anita.

‘I think a nice opportunity came when a Paris art–gallery owner popped in one day. She expressed a wish to have Anita’s art at her gallery’, Liliane Hellström says.

At her home in Innanbäcken Anita says: ‘It feels good that my paintings have been so well received, but I am quite calm about it and will see what it might bring for the future.’

When Focus Is on Man

In Anita Lindvall–Ståhle’s art focus is on man. But it is not about portraits or even portrait like people. It is more about an attitude, man versus nature.

In the oil painting Blue we see a male in profile, surrounded by snow, ice and cold. Its absolute antithesis is the aquarelle Mother Earth, where a woman has come to peace in a scorching desert. Yes, man’s ability to adapt to different climates is astounding.

Her art is not just about the meeting between man and nature. It is also about meetings between people. Two rootless individuals have found each other in the large oil painting You and Me. But where are they? It almost looks like a sketch of a slave ship seen from above.